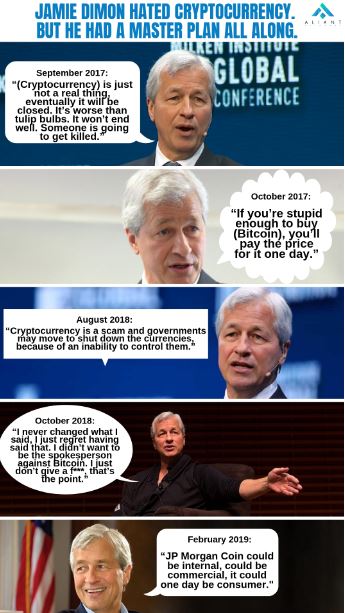 Jamie Dimon hated cryptocurrency. But he had a master plan all along.

In a span of a few years, JPMorgan Chase CEO Jamie Dimon has gone from famously hating on cryptocurrency to pushing his company headfirst into the crypto space. In 2019, after years of bashing bitcoin, and at one time even mocking his own daughter for investing in it, we discovered that he had a master plan all along.

Blockchain technology, which allows financial transactions or any other information to be stored and exchanged by a network of computers without the involvement of banks or governments, is the most disruptive thing that has ever happened to traditional banks, which make most of their money from fees. Bankers have been slow to embrace blockchain, cryptocurrency, and fintech innovation in general, but it’s refreshing to see that things are changing. If you can’t beat them, you might as well join them, right?

While Dimon was publicly bashing crypto, he was quietly having the JP Morgan team create blockchain-based digital assets of its own. In 2016, JP Morgan introduced Quorum, an enterprise-focused version of Ethereum.

“If blockchain is going to be disruptive, I’d rather it happen on our platform,” said Daniel Pinto, Co-President and Chief Operating Officer of JPMorgan Chase. “And we don’t want to be late to the party. It’s better to get there at the beginning.”

J.P. Morgan recently began offering bank accounts to Gemini and Coinbase cryptocurrency exchanges. Per the banking relationship, J.P. Morgan will provide deposit, withdrawal and transferring services for Coinbase and Gemini customers with ACH infrastructure. This news is significant not only because of all the negative things Jamie Dimon has said about cryptocurrency in the past, but also because this could open avenues for better banking relationships for Bitcoin companies going forward.

Central banks in Asia and Europe are close to launching digital currencies for future payment systems and cross-border transactions, according to accounting firm KPMG. And governments around the globe are looking at blockchain-based central bank digital currencies (CBDC) as something that could someday give them a competitive advantage in global trade.

Here at Aliant, we realized years ago that blockchain and cryptocurrency would disrupt the fintech and payments industry. Instead of initially rejecting it like most other processors and traditional financial institutions, we kept an open mind, educated ourselves on how it worked, and embraced that it can change payments as we know it. The Aliant team has spent the last two years developing our CryptoBucks technology that allows our merchants to accept cryptocurrency payments, and we are proud to be the ONLY payment processor offering a credit card, debit card, and crypto solution. It will be interesting to see how the traditional institutions continue to get in on the action.

November 2015: “No government will ever support a virtual currency that goes around borders and doesn’t have the same controls. It’s not going to happen.”

September 2017: “(Cryptocurrency) is just not a real thing, eventually it will be closed. It’s worse than tulip bulbs. It won’t end well. Someone is going to get killed.”

October 2017: “When I made that ‘stupid statement’ [calling bitcoin a] fraud, my daughter sent me an email saying, ‘Dad, I own two bitcoins.’ My formerly smart daughter.”

August 2018: “Cryptocurrency is a scam and governments may move to shut down the currencies [cryptocurrency], because of an inability to control them.”

October 2018: “I never changed what I said, I just regret having said that,” he said. “I didn’t want to be the spokesperson against Bitcoin. I just don’t give a fuck, that’s the point.”

February 2019: “JP Morgan Coin could be internal, could be commercial, it could one day be consumer.”